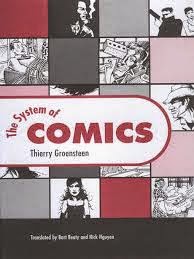 
The current definitions that are present for now usually take two distinguishable paths. The first is the attempt of capturing the essence of the comic. Thierry Groensteen, in his brilliant book The System of Comics expresses his reservation in regards to this method, which is, in his opinion, an erroneous one. His argument is that “comics rest on a group of coordinating mechanisms that participate in the representation and the language, and that these mechanisms govern in their movements numerous and disparate parameters, of which the dynamic interaction takes on extremely varied forms from one comic to another.” (Groensteen, 2007: Introduction) In other words, the inconsistent values of these parameters that add to develop a comic cannot be quantified under a single formula. And since creativity is infinite, trying to capture the essence of a comic seems more like a super-human feat that belongs inside the comics. 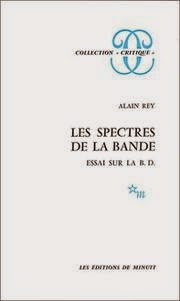 There are, nonetheless, dozens of these formulas that only fall short in telling the whole picture, like one of the many in Alain Rey’s essay, Les Spectres de la bande, in which he considers that the essence of the comic is in “the organized space that cheats between the two dimensions of the format and the perceptive suggestion of the world.” (Rey, p. 102) This is, of course, very superficial, empiric almost, and most certainly not satisfactory for the fundamental endeavor of this “essential” approach.

Other researchers realized that the vastness of the comic cannot be synthesized and chose the path of setting the boundaries, the rules of proper function of the comic. A set of conditions for a work to be considered a comic were enunciated, in different manners and often contradictory, such as the ones of David Kunzle or Bill Blackbeard. The four conditions that a comic must fulfill, in the view of Kunzle:
1) There must be a sequence of separate images;
2) There must be a preponderance of image over text;
3) The medium in which the strip appears and for which it was originally intended must be reproductive, that is, in printed form, a mass medium;
4) The sequence must tell a story which is both moral and topical (see Kunzle, 1973)—are quickly rebuked by Blackbeard which comes with its own definition:
A serially published, episodic, open-ended dramatic narrative or series of linked anecdotes about recurrent identified characters, told in successive drawings regularly enclosing ballooned dialogue or its equivalent and generally minimal narrative text. (Blackbeard, p. 41)
These two definitions can be easily proven wrong, taking as an example the “pantomime” comics (meaning they have no text whatsoever).
With great popularity in the nineteenth century, these “mute” comics that originated from Germany, even though they had no text, kept their narrative solid and decipherable. Although there are so many comics devoid of any dialogue or captions, some researchers still insist that the difference between comics and frescoes is the presence of text, piece that is indispensable if one wishes to understand the complete story. This also can be disproven, since, even if a comic strip that was created with text is “amputated,”its core power of narration remains intact. The diegetic connections and panoptic display of serialized images inside a comic, which are also fundamental to the art, is what enables the story to be fully portrayed, the narrative having the option to discard textual help completely. After all, the lack of text on Trajan’s column didn’t keep historians wondering what happened in Dacia.
Thierry Groensteen militates in his book for the dismissal of the current dogma over the nature and elements of the comic, if one wants to understand all the complex cogs that form this art. It is, of course, not a singular area of the arts where the problem of definition occurs. It can be encountered also in cinema or modern arts. Even the classic definitions have been made obsolete by the current developments of the more “traditional,” as in old, arts like painting, novels or music. It is a very hard task to pinpoint consistencies in an ever-changing organism; nevertheless, the basic structure can be observed.
In his approach, he identifies the fundamentals of the comic, and goes into analyzing it from there, always having this perspective in mind:
If one wishes to provide the basis of a reasonable definition for the totality of historical manifestations of the medium, and also for all of the other productions unrealized at this time but theoretically conceivable, one must recognize the relational play of a plurality of interdependent images as the unique ontological foundation of comics. (Groensteen, 2007: Introduction)

This interdependency is called by Groensteen an “iconic solidarity.” This concept is detailed further as containing two fundamental characteristics of any comic in existence or which can be conceivably created: the interdependent images are, on one hand, separated, functioning on their own; and, on the other, they are “plastically and semantically over-determined by the fact of their coexistence in praesentia.” Just like the human organs, they fulfill unique actions, but they are part of a larger, autonomous organism. Of course, the author recognizes that even his “fundamentalist” definition isn’t perfect—starting from this we can consider a comic every fresco, ancient Egyptian book, codex, Japanese picture scroll etc.—but it is emphasized that this iconic solidarity is a “necessary condition so that visual messages can, in first approximation, be assimilated within a comic.”(Groensteen, 2007: Introduction)
In the attempt to properly revise and create a proper definition, the art of comics, or the “ninth art,” must be viewed more like a field than a singular object. Just like in the asteroid belt, there are, indeed, many objects of comics, but these active, developing objects cannot be pinned down, but encompassed at a bigger scale, into a field. It is the field of comics that must be analyzed, and in no case particularities that are by definition not generally available. Of course, where the line has to be drawn in order to avoid the extreme generalization of a definition, which ends up not telling us anything, is for the eminent researchers to decide.

[1]Series of adjacent drawn images, usually arranged horizontally, that are designed to be read as a narrative or a chronological sequence—Encyclopedia Britannica