Conveying familiar objects, forms and postures and other recognizable phenomena into symbols is something from which the comic artist heavily draws from. Turning the recognizable materialism into abstract symbols is one layer of the foundation of the comic, descending from thousands of years of pictographic languages and forms of writing, which shows how the visual and textual is notnecessarily separated, but intertwined and co-dependent.
The essence of Thomas Wolf’s essay is the similarity in the psychological processes of deciphering and understanding while viewing a word or/and an image, therefore making the blending of the two very natural, one of the mediums in which this happens most often being what Eisner calls sequential art.
The same happened in other cultures, for example, with the Chinese or Japanese pictographs, that were refined until the art of calligraphy emerged. Besides the use of pictographs, calligraphy brought another dimension in the use of symbols: the style of execution. Depending on the thickness of the strokes, delineation, and other factors imposed by the writer, the same text can reach new meanings and transmit or invoke different feelings to the reader.While the Chinese and Japanese calligraphy was honed to offer new textual and visual dimensions, when talking about the evolution of comics, the graphical representation of the lettering was also refined and repurposed, one of the best examples being A Contract with God, considered the book that popularized the term of graphic novel in America and overseas, but, nevertheless, among the first of its kind. Here, Eisner puts the text “in service of the graphic story,” functioning as “an extension of the imagery.” (Eisner, 2000: 10) He somehow brings text back to its visual roots, through which the ‘embellished’ text is used to “support the ‘climate’” of the scene (see img. 2 and 3).

If the letters that make a language are, in fact, glyphs, icons, recognizable images, then it can be argued that comics do the same within their drawings, employing on recurring images and repetitive, recognizable symbols, thus creating a visual language that can be decoded and assimilated. Recognizable postures of the human body are often used to convey the desired message. But, as with the pictographs, the illustrator can change the meaning or the atmosphere of one’s comic ‘pictograph’ through various additions (or subtractions) of lighting and other ‘determinatives,’ or adjuvant elements, like facial expressions, dialogue or setting.
Even more, stories can be created without having any text at all. Sequences of images without any dialogue do not weaken in any way the narrative, but in some cases the lack of words leaves more for the fruitful imagination of the reader, enriching the storytelling potential. There are even complete stories created entirely in pantomime, which can still be ‘read’ and completely understood, the only issue here being the skill of the illustrator, which must express the desired emotions through the particular style in which the scenes are drawn. By drawing on common postures, expressions and actions, the pantomimic story is as expressive and full of message like an ordinary, dialogued one, which only stands to show the viability of imagery in conveying the message from the creator to the viewer, or reader. Below, there are two short stories from Will Eisner’s New York the Big City, which use this form of ‘pure’ illustration. 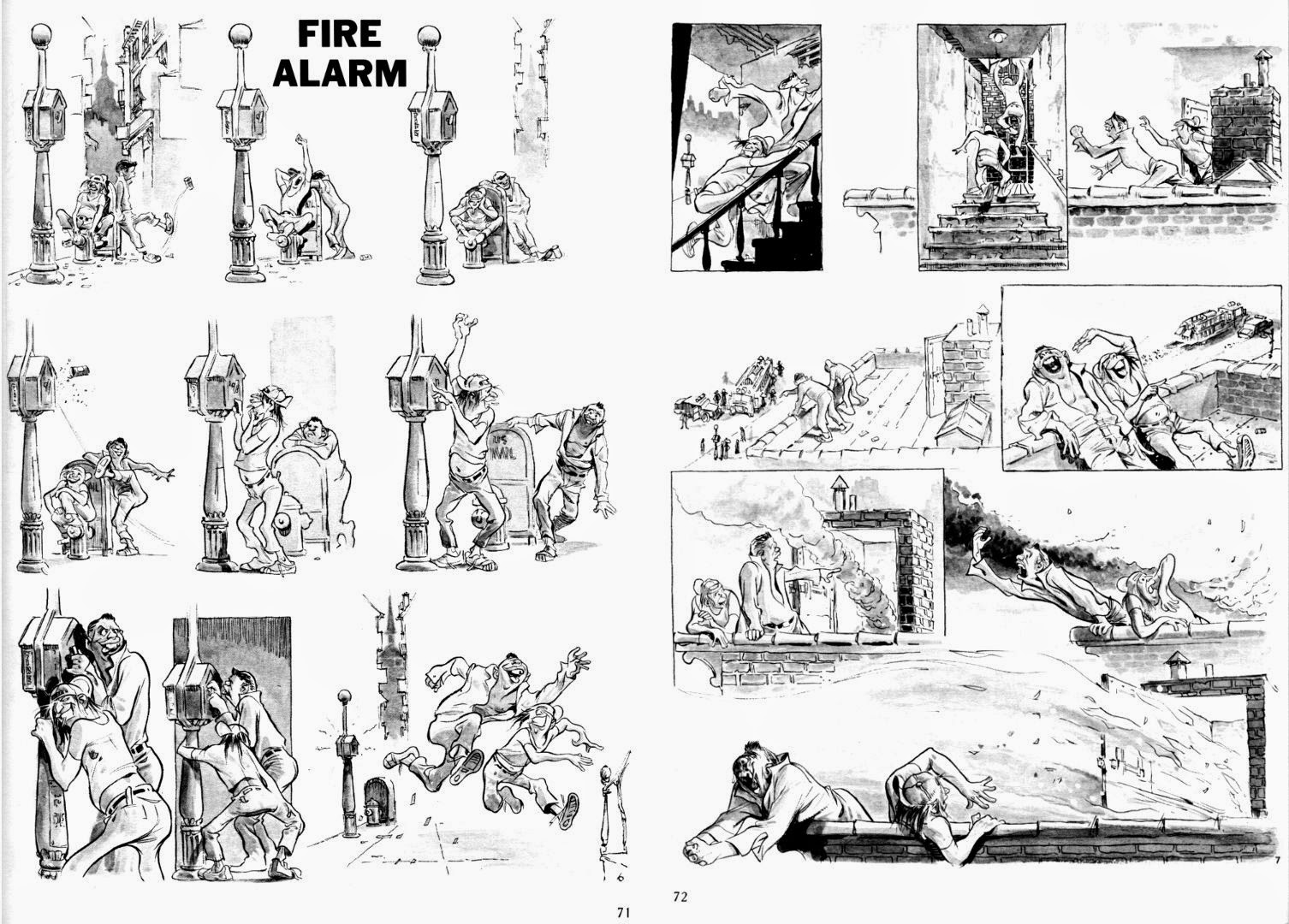 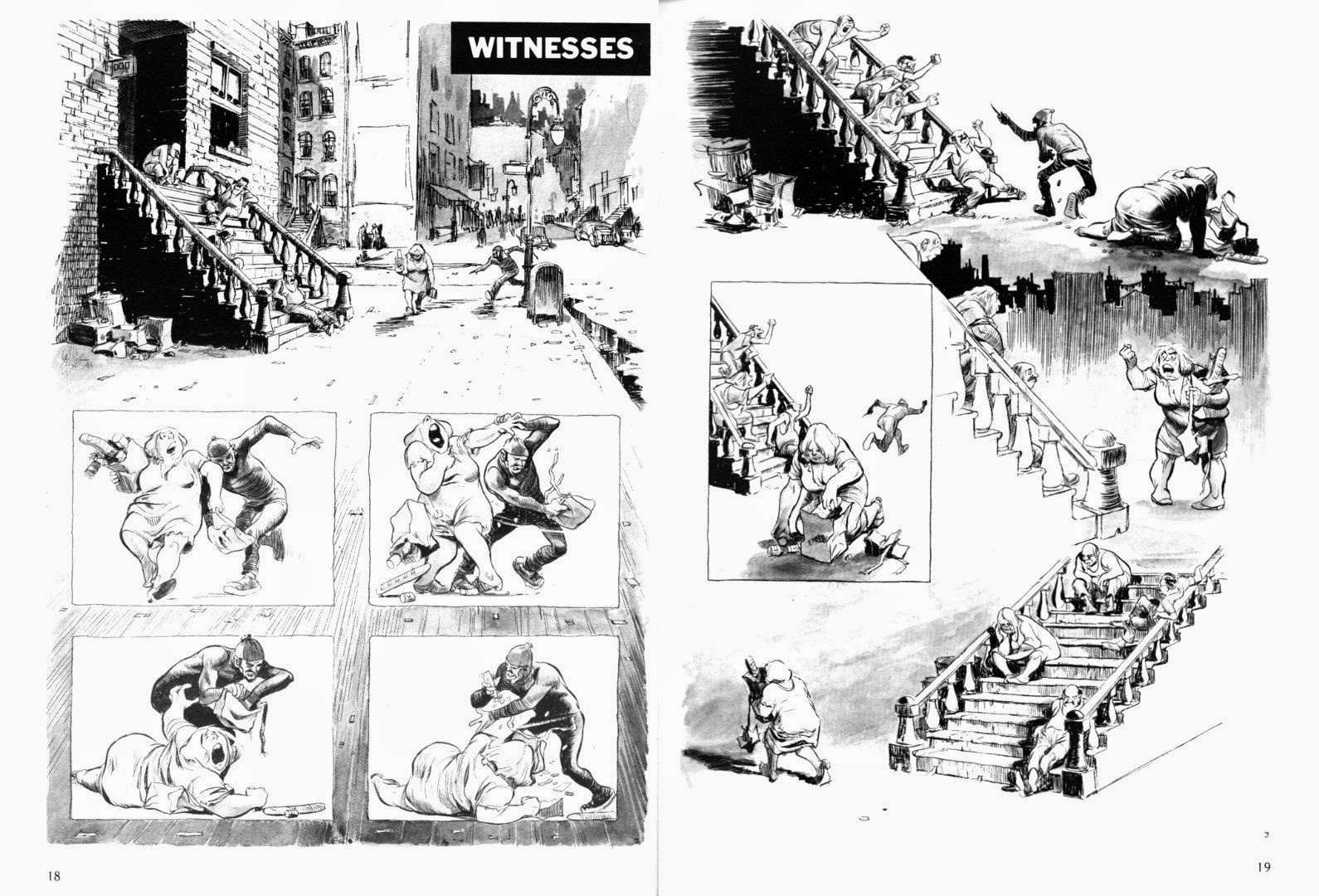 3.4 Filling the gaps with imagination
Symbols are not only letters, thus the process of reading does not consist only in lettering, but the reading and deciphering of symbols. Whether these symbols are pictograms, letters, images or even sounds, reading is a cognitive process which almost any animal, at some level, is employing. The brain’s habit to develop patterns and recognize them in our environment is the basis of reading, reading our world. When dwelling deeper in this extremely intricate and ever‑changing process of the human brain, we cannot say but the fact that comics are by excellence a heavy user of these patterns, hinting us the narrative, but letting our brain and past experiences—our own layout of patterns—fill the gaps. The brain cannot have pattern gaps, and this is a kink that comics exploit with great success, just like shadows in the dim light,we do know something is there, but we have to imagine the rest of the picture.
[1] Thompson, Craig. Blankets: an illustrated novel.Marietta, Ga.: Top Shelf, 2003
[2]Clowes, Daniel. Ice Haven. London: Jonathan Cape, 2005
[3] Seth. It’s a Good Life, If You Don’t Weaken.Drawn and Quarterly, 1996
Publicat de Dodo Niţă la 01:50