The success of reprinting the old, serialized comic strips from the daily newspapers took the publishers by surprise. By 1935, the material runs out and the companies find themselves in the situation of seek for new, original material to satisfy the growing need for comic books. June 1938 is the date where all comics historians converge in opinion, that the Golden Age for the comic book beganin the first issue of Action Comics, a comic book anthology.Two artists that got rejected for years with their original comic concept, Jerry Siegel and Joe Shuster, get published with what is to become a national and world-wide phenomenon: Superman. A copy of the first issue of Action Comics, featuring the archetypal superhero, would end up selling in 2010 for the fabulous sum of $1.5 million, an indisputable evidence of the scale and influence Superman has had over pop‑culture since its creation over 70 years ago. With the immense success of this ew type of character, the demand for superheroes in comics became overwhelming, this breed of vigilantes ending up to dominate the industry completely during and after the Golden Age. Heroes like Dick Tracy or Flash Gordon captured the imaginations of young Americans. Over the next years, Detective Comics (which is the huge DC Comics company nowadays) create iconic superheroes like Batman, Flash, Green Lantern, Hawkman or Aquaman.
1939 is the year when Timely Comics was founded, which later became Marvel, another giant in the industry to this date, and top rival of DC Comics. Superheroes like The Sub-Mariner, the Human Torch or Captain America were selling millions of copies.
While in ’39, the number of companies that published comics was 7, printing around 50 comic book titles, in 1940 the number of original titles reached a staggering number of 250, published by 24 firms.


The hunt for new superheroes was on the way. Men with the most outlandish powers appeared into the scene, entertaining kids and teenagers all around the country, which could buy a comic book with a fraction of their lunch money. The 10 cent comic books were everywhere. A huge industry was starting to develop and it lived only on the pocket money of school kids.
With the creation of the two, most iconic superheroes of all time, Superman and Batman, the extremes of the archetypalhero have been set: on one side, there is Superman, with such superpowers that he could move planets and, on the other end of the spectrum, there is Batman, which had no power at all. All the other superhero characters fit somewhere between these two, and has remained very much the same until the present day.
The Batman comic book also introduced new characters into the industry that were immediately adopted: the supervillain. A maniac clown, The Joker, was the first of its kind in the history of American comics, a recurring maniac that gave the hero something to do in most of the numbers. It is cited as one of the greatest comic book villains of all times. The supervillain became a credible motivation in the narrative, the archenemy typology giving meaning to the hero and keeping the readers glued to the comics with every issue.
Another first for Batman was the introduction of the sidekick, a sort of lesser hero that aided the main character in the fight against crime. This idea came more from a technical issue, since Batman stories were created for broadcast radio and the hero couldn’t talk to himself half of the show. Nevertheless, it caught on and the sidekick became a viable option for any superhero to have, be it recurring or episodic. 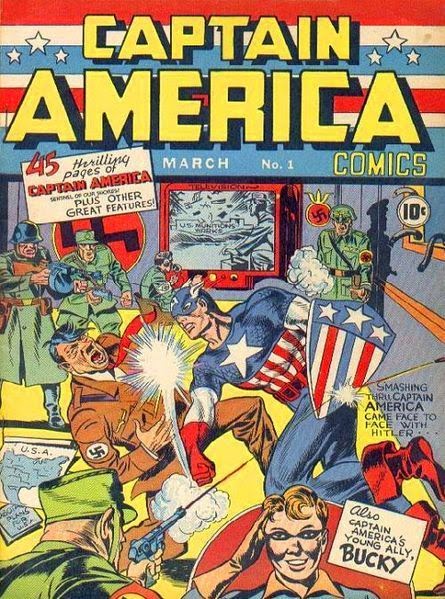 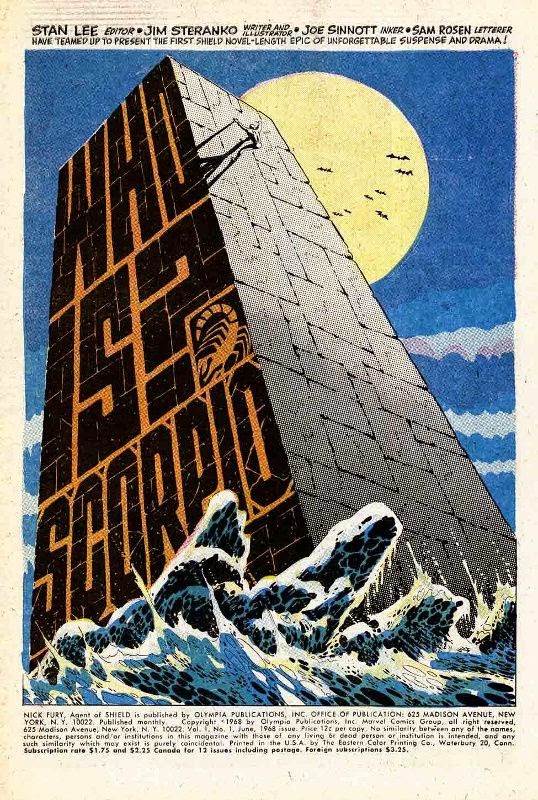 This is the time when also old superheroes that trickled in the background now reappeared, thanks to artists that pulled them from the early 50s, and updated the style and narrative to suit the current period. Artistic experimentation started to emerge, and Jim Steranko was in the first line. His revamped Nick Fury set groundbreaking shifts in the graphic layout of the page, design and motion. Steranko was the first in the American industry to create the starting 3 pages of an issue without any speech bubbles or captions: 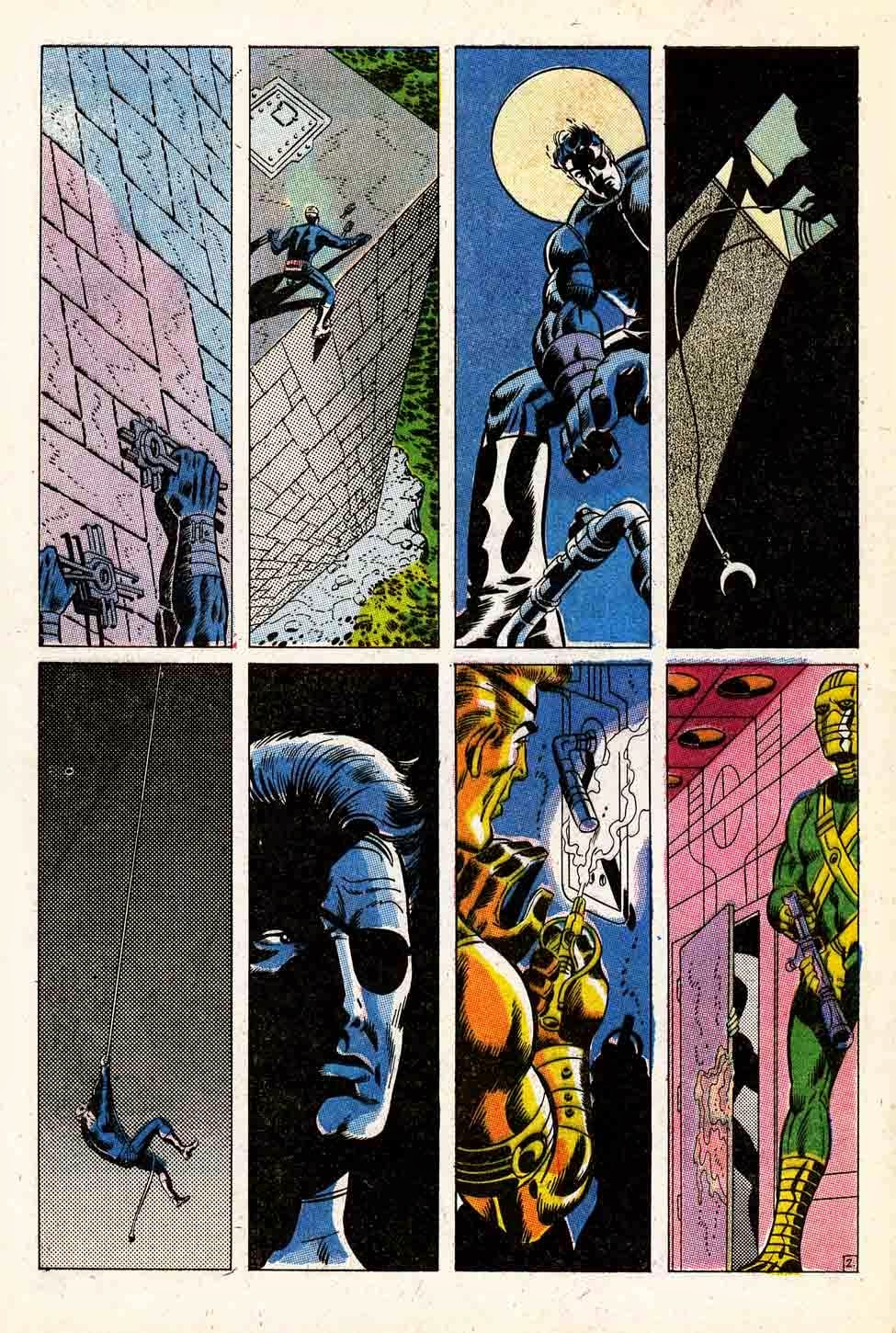 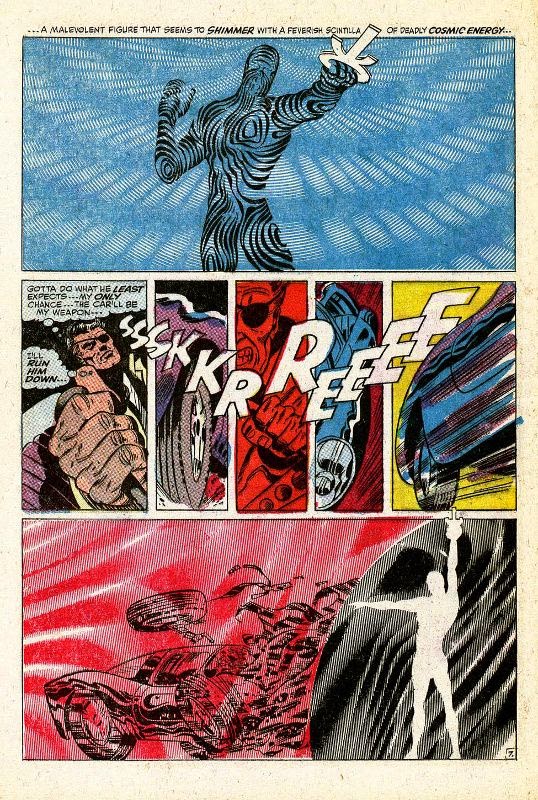 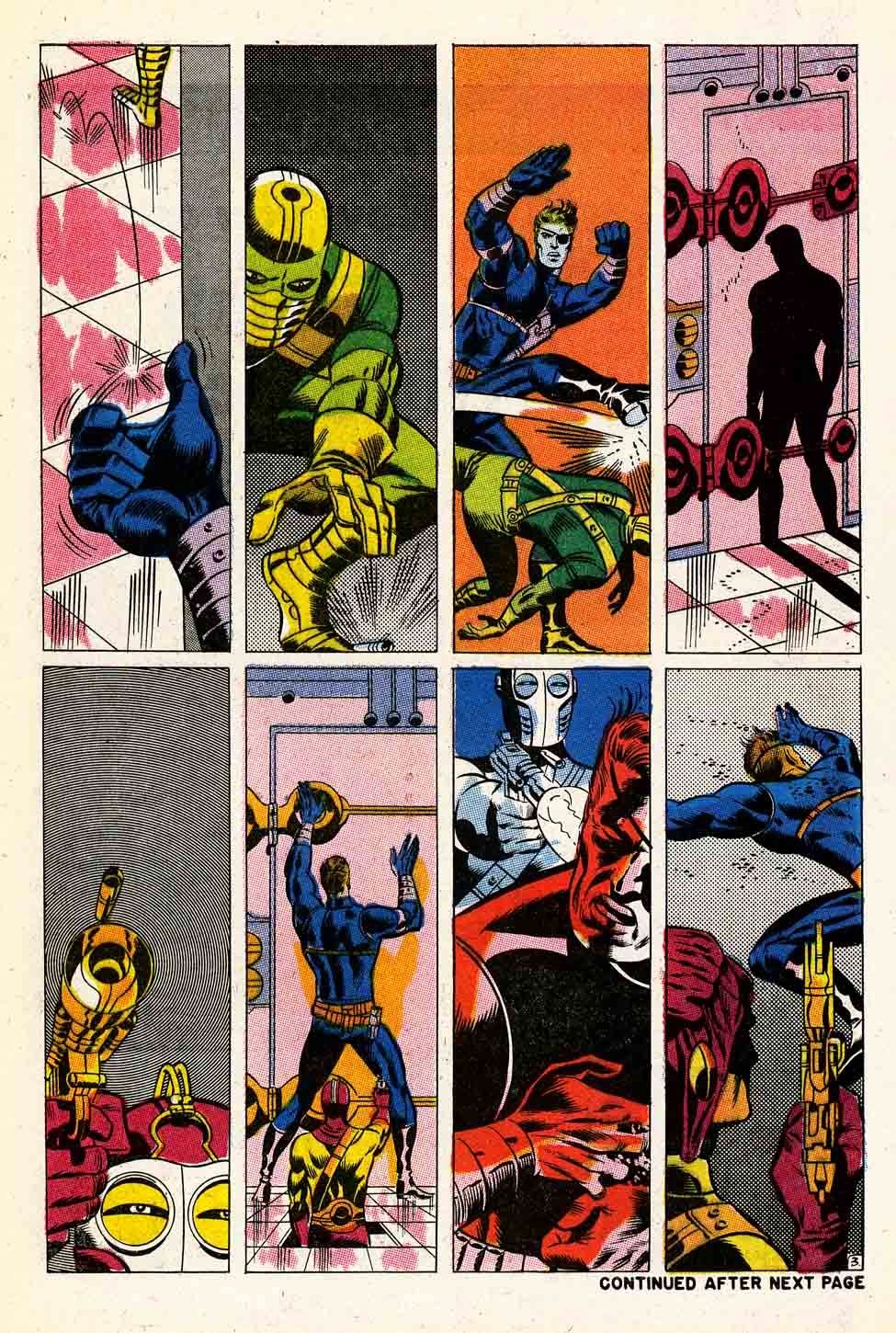 The real interesting thing about this whole event was that his publishers didn’t want to pay him for the three pages, since they considered there’s nothing in them. The narrative was still, in the mind of the industry, linked to the text, and a succession of images couldn’t really convey the full story to the reader. But Steranko knew that the story was there, in the images alone. That’s why he created them like this in the first place. Empirically or not, the artist understood very well the mechanics of this form of art, and paved the way for so many ‘pantomimic’ comic pages in the future. As masterful as Eisner did it back in the day, text elements became a part of the images, integrating and putting them in the service of the whole page. Full page panels were something not very often used, but Steranko made them his signature, blending text, imagery and psychedelic colors to make a truly masterful art. His experimentation brought him lots of mail from art students, that recognized his inspirations and techniques, confessing their admiration and appreciating the very intelligent way—mainly graphical-wise— that the artist chose to create his comic books. 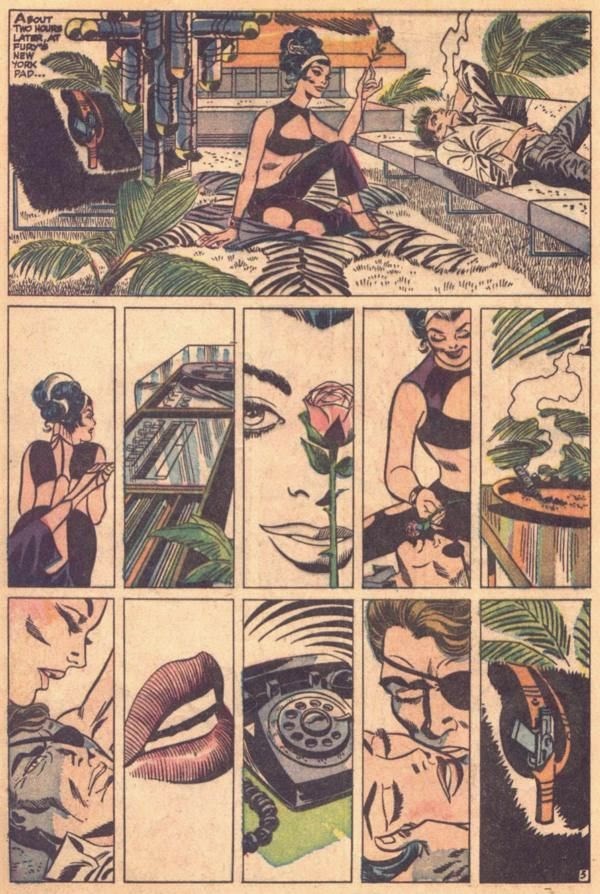 Immersiveness is a trademark of Steranko and a later goal for every graphic artist working in the industry. He goes beyond the classic panels, like in this  image, where Fury is infiltrating an enemy fortress. The page is adorned with mazes, and it is even a maze itself, replicating the corners and rooms the superhero must navigate in order to reach its goal. The reader must navigate Steranko’s mazes as well, in order to get from one panel, or in this case rather scene, to another. 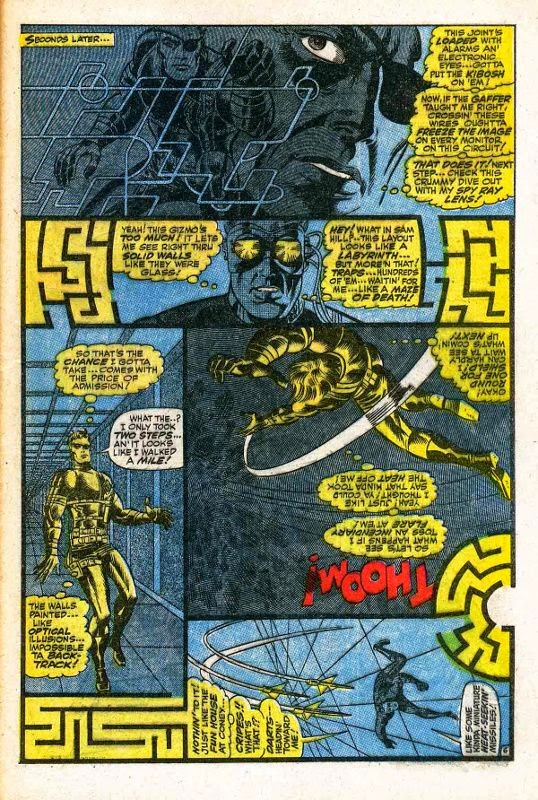 Although a fading name in the industry today, in terms of artistic value, Steranko set new standards for the comic book, coming with art styles that belonged to other, more ‘serious’ areas, and intricately combining them into a seamless modern piece of art.
The Civil Rights movement was another episode in the history of the comic book, which prior to that had mostly secondary white characters and there were only white superheroes. Slowly, a black policeman or doctor started to appear in the crowd. Around 1964-65, Black Panther appeared, the first black superhero, followed by the mercenary Luke Cage.
New boundaries are broken in the 70s also, when the Feminist movement in America became very pithy in the way of life. The New Wonder Woman, a female superhero with an Amazonian backgroundwhich allowed women to flourish thanks to the lack of male presence, fueled the movement with comics and TV series.
The Watergate scandal is another hard blow to the American democracy in the 70s. Bewildered by the total corruption of the system and with every idea about the rule of law shattered the paramount hero that stood for America’s principles gives up. Captain America throws his costume away and becomes Nomad, a superhero without any country. The country‑less feeling that overwhelmed the nation found its quintessence in this superhero comic. The press was focused almost solely on this scandal, and the comic superheroes start discovering in their adventures the corruption that was happening right under their noses, while they were working hard to support a nation that, apparently, was hollow and decrepit.
A very accurate portrait of America’s state of mind in the 70s can be created only by closely studying the comic books of that period. America has stopped being that idealized country of democracy and law, which deserved to be fought for by everyone, and was hated by everyone else for its riches.
2.6 From reds and greens to greys and blacks
In the new decade of the comic books, the 80s, the narratives make an incredible leap to novel-worthy real life. The teenagers of the 50s and 60s are now mature enough to seek another form of comics, comics that were credible, that were about the real, deep issues of America. The dialogue and the art style underwent significant changes, showing how people viewed the world now, and it wasn’t in lively colors anymore.
Frank Miller’s Batman—The Dark Knight Returns and Alan Moore and Dave Gibbon’s Watchmen, both released in 1986, were the two iconic books that contradicted the childish prejudice of the comic book. These literary works, with an outstanding art, take a very different approach to the meaning of the superhero and ultimately, the meaning and boundaries of a comic book. 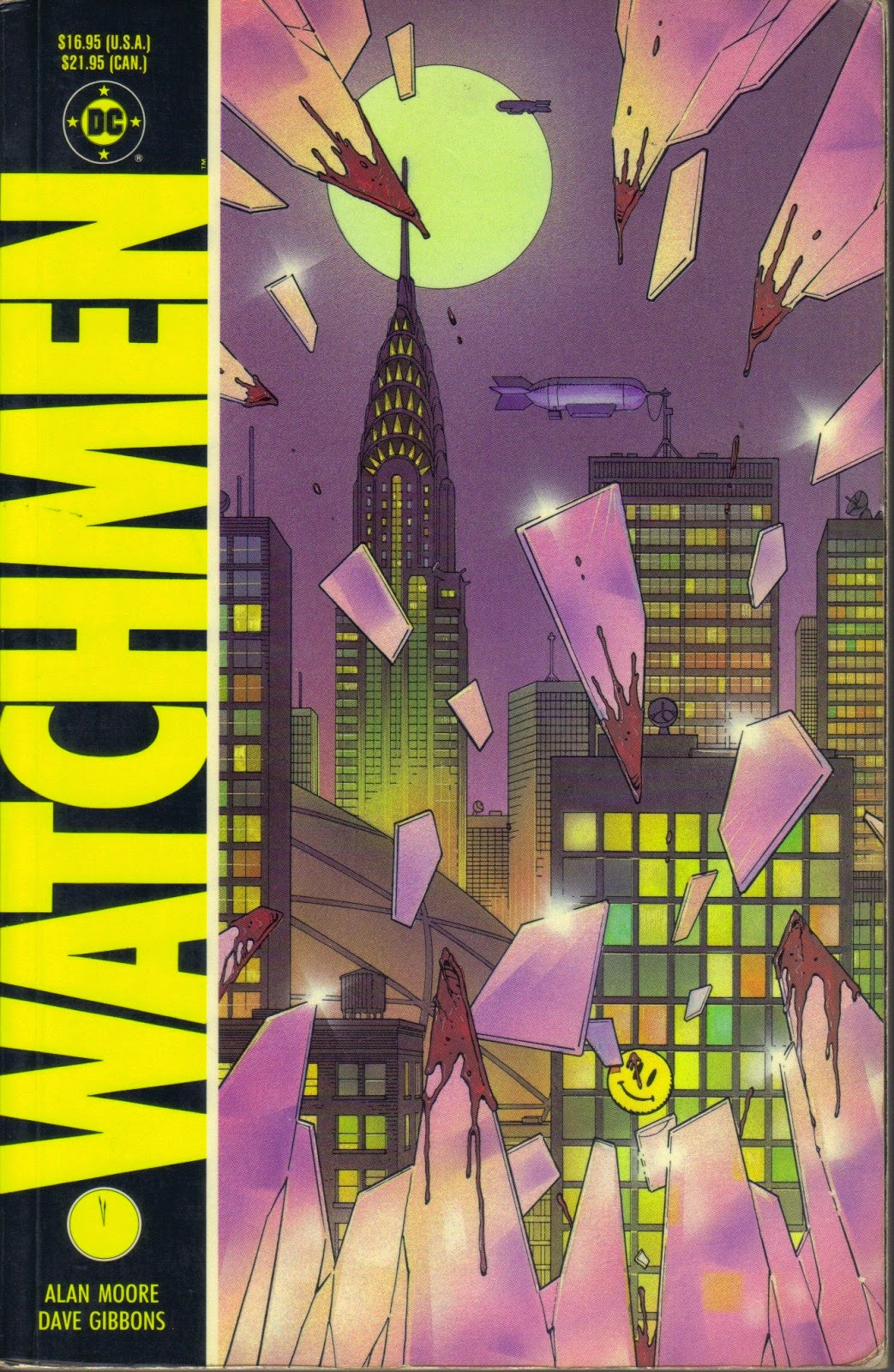 Written from a dark, adult point of view, Watchmen is set in an alternate history, where superheroes helped America to win the Vietnam War and the danger of nuclear war with the Russians was becoming more and more menacing. Superheroes are now a band of hooded vigilantes that worked for the government and are now banned from ever running the streets. Focusing on the struggles and personal development of the characters, Watchmen is a critique to the status of the superhero and dwells deeper into the minds of the protagonists, emphasizing the character of the man or woman behind the mask than the ‘good deed.’ When asked to explain the driving force behind the iconic comic book, Alan Moore said that it was “a good way to start a comic book: have a famous super-hero found dead. As the mystery unraveled, we would be led deeper and deeper into the real heart of this super-hero’s world, and show a reality that was very different to the general public image of the superhero.” (Cooke) 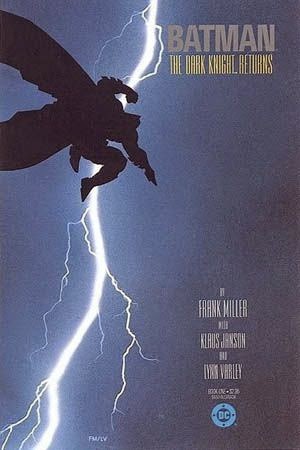 The Dark Knight Returns adopted a gritty, grungy art style that was in dissonance with the older Batman comics. With a great eye for telling a story in images, and a keen sense of how a dialogue should be constructed, the dystopia in which the retired superhero is thrown in reflects, again, the somewhat pessimistic world of the 80s, from which the artists drew inspiration. Black satire, drama, character decomposition is something Miller focuses on. Just like in Moore’s Watchmen, superheroes are as broken as all of us. It’s all a matter of perspective.
2.7 The future of comics
Following these iconic productions, the comic industry produced in the later years thousands of issues, experimenting, revamping and overhauling superheroes to satisfy the public’s demand. The spread of comics worldwide has created more educated readers, that, besides the story, look for the subtleties of each panel, and the artists and writers haven’t let them down. The genre of the comics has also diversified, artists like Spiegelman (Maus) or MarjaneSatrapi (Persepolis) employing a memorial approach, with great success and international recognition. With over 300 titles in production and around 84 million copies sold only in 2013 in the U.S. alone, the industry is thriving, in a period where many physical publications move their business online. It is a shift that is expected also in comics, since smartphones, tablets, laptops and computers, all have services providing digital copies. The medium of the comic is diversified, amplified and in the end, it doesn’t really matter how it reaches its audience, but rather the continued expansion of its fan base all over the world.
[1]The face behind Captain America.
Publicat de Dodo Niţă la 13:25